Birth registration in the face of natural disasters: Vanuatu and the tropical cyclone Pam 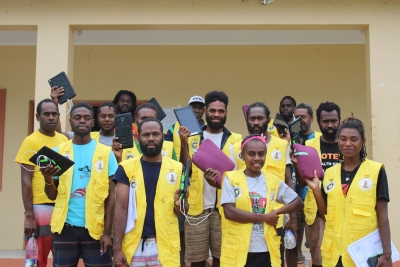 The Civil Registration and Vital Statistics Department, in collaboration with other national stakeholders as well as the United Nations Children’s Fund (UNICEF) and the United Nations Development Programme (UNDP) responded to the crisis by increasing capacity for registration and launching awareness campaigns and mobile registration operations. The cost of travel was a major obstacle for many families, so registration points were opened in remote islands and “catch up days” were organized in areas that lacked access to government services. As a result more than 250,000 children and adults were issued a birth certificate, including around 80,000 for the first time.* A mini census with complete enumeration conducted in 2016 showed that 85 per cent of the population had a birth certificate.

The Department of Civil Registry also signed memorandums of understanding with the ministries of health and education to extend the registration role to midwives and teachers. Further partnerships are still being developed, for example, to link national identification to voter registration. Finally, and critically with regards to natural disasters, the Government of Vanuatu developed a central civil registration database with support from UNICEF and the Government of Australia. The locally developed system is better adapted to the specific needs of the country, and in post-disaster registration campaigns, the database ensure accuracy and avoiding double registrations. As Vanuatu is ranked by the United Nations University's Institute for Environment and Human Security as the world's most at-risk country for natural hazards,** efforts to increase the resilience of the CRVS system are even more critical.