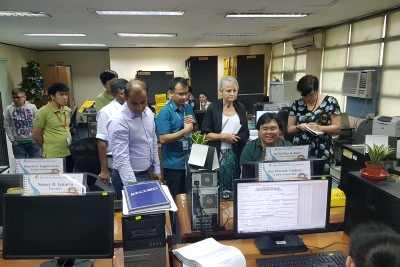 The Philippines Statistical Authority publishes population data from a variety of sources such as censuses, surveys, and a civil registration system with relatively high completeness. Yet the timeliness and quality of data needed some improvement. The lack of human resources to code and analyse data meant that the data were not specific enough to properly guide policies and publication was often delayed, especially for detailed data, such as causes of death.

Human resources and time are needed to record correct and precise underlying conditions and convert that into an accurate code for cause of death. More than 60 per cent of deaths in the country occur outside of hospitals.* For these deaths, doctors often have very limited information on which to determine cause of death. To help solve those problems, the Bloomberg Data for Health Initiative partnered with the Government of Australia in 2015 to support the implementation of SmartVA (smart verbal autopsy), Iris (automated coding system for cause of death), and ANACONDA (Analysis of Causes of National Deaths for Action). Those tools use the International Statistical Classification of Diseases and Related Health Problems (ICD), Version 10, developed by the World Health Organization.

SmartVA aims to attribute a cause to death occurring outside of health facilities for which there are no medical records or information is insufficient. Using tablets or laptops, a formatted interview between a doctor and the family of the deceased aims to determine a probable cause of death.

The Iris tool automates the mortality coding system. It converts all entries on the medical certificate into an ICD code, and selects the underlying cause of death. This process was previously done manually by coders at the Philippines Statistical Authority. The implementation in the Philippines was guided by the University of Melbourne as a member of the Data for Health Initiative.

The final tool, ANACONDA software, was jointly developed by the University of Melbourne and the Swiss Tropical and Public Health Institute at the University of Basel. It checks the plausibility of mortality levels and quality of causes of death data using information from established epidemiological and demographic patterns. It therefore measures common problems such as lack of detail, improbable sequences and other issues leading to “garbage codes”, which assesses the reliability of the data and reveals areas where training is needed.

Using the training of trainers approach to roll out these tools, a large number of provinces and hospitals were reached quickly while also greatly improving the human resources available locally. Results of these innovations can already be seen, with the Philippines Statistical Authority now able to produce cause of death statistics in less than half the time it took previously when the death certificates were manually coded, while having increased data quality.