Vanuatu towards the SDG 16.9 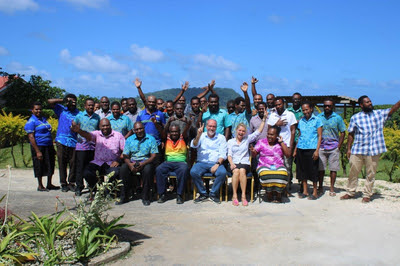 The Vanuatu Civil Registration and Vital Statistics Department (CRVSD) is committed to achieving the Sustainable Development Goal 16, Target 16.9: "By 2030, provide legal identity for all, including birth registration." It seems very possible that this target, in Vanuatu, will be achieved in the next few years and most likely long before 2030.

In 2019, the CRVS Department and the Vanuatu Electoral Office (VEO) established a joint nationwide project to undertake combined civil and voter registration, issuing National ID cards, ahead of the General Elections in March 2020. The countrywide exercise was supported technically and financially by UNDP/Vanuatu Electoral Environment Project (VEEP) with funds provided by New Zealand Government. In 2020, after the Vanuatu General Elections, the project entered into a new phase with the objective to validate and verify the citizens datasets stored in the CRVS and VEO systems. However, in consideration of the destructive impact of category 5 Tropical Cyclone Harold in the central and northern islands, it was decided to upscale the initial process to address a new requirement arisen after the cyclone: the replacement of primary identification documents of big parts of the population in affected areas (birth certificates and National ID cards).

Several activities have been required to support the Verification and Validation Project. For example, a comprehensive Training of Trainers (ToT) was held in the capital Port Vila to engage officers to supervise the field staff. The officers were then deployed to the Provinces where they in turn, trained around field workers to carry out the validation and verification exercise.  A public awareness campaign has been developed with the production of a short documentary, informative posters, animations and publications on Facebook, as well as radio announcements, targeting different groups, communities and geographical regions. A comprehensive ‘Validation Training manual’ was also developed and is part of the training process, in addition to procurement of field work registration equipment.

The field work material for each operator includes tablet devices, power banks, and registration forms (as required by the legislation). The field workers are deployed to each Areas Council in each Province and go from village to village. A verification toolkit is installed in each tablet with a copy of the Validation Manual in digital format. The toolkit comprises of a set of tools, e.g.  mobile application (Android app) for Electoral and Civil Registry database verification, using KoboCollect forms for data collection of citizens and villages data and information (including geo-location). The forms are also used to capture registration of newborns and deceased. The toolkit furthermore includes satellite maps developed through collaboration between UNDP-UNITAR that identifies where the households are located in each Province for easy identification and improving coverage.

With the field work finished, all collected forms are consolidated in a specific database where a dedicated group of data entry staff, based in Port Vila, works in the data corrections and updates, production and issuance of birth certificates and National ID cards.

It is important to mention that since 2020, citizens are allowed to use the National ID card for voting as well as accessing other services. As a complementary result, the Government is moving towards establishment of a Population Register using the National ID Number as a citizen reference in all administrative departments.

The two tables below provide some population statistics as of December 2020, before the data validation and verification project was deployed.

Institute on Statelessness and Inclusion offering two courses on

The Institute on Statelessness and Inclusion is offering two courses on statelessness in 2020: 1)…

23 Member states have already reported on their progress on

As an important component for monitoring and evaluating progress, countries committed to reporting…

At the request of DSG Ms. Amina Mohammed, a time-bound inter-agency group — the UN Legal Identity…

The University of Melbourne, as part of the Bloomberg Data for Health (D4H) Initiative, hosts a…

Kyrgyz Republic announced as the first country to

There is no region of the world unaffected by statelessness, particularly given the annual increase…

During the 74th Session of the UN General Assembly, the UN Statistics Division, the Global…

The United Nations Economic and Social Commission for Asia and the Pacific (ESCAP), Statistics…

Through resolution 73/1, ESCAP member States decided that in the years when the High-level…