Technology in the Service of Development, The NADRA Story 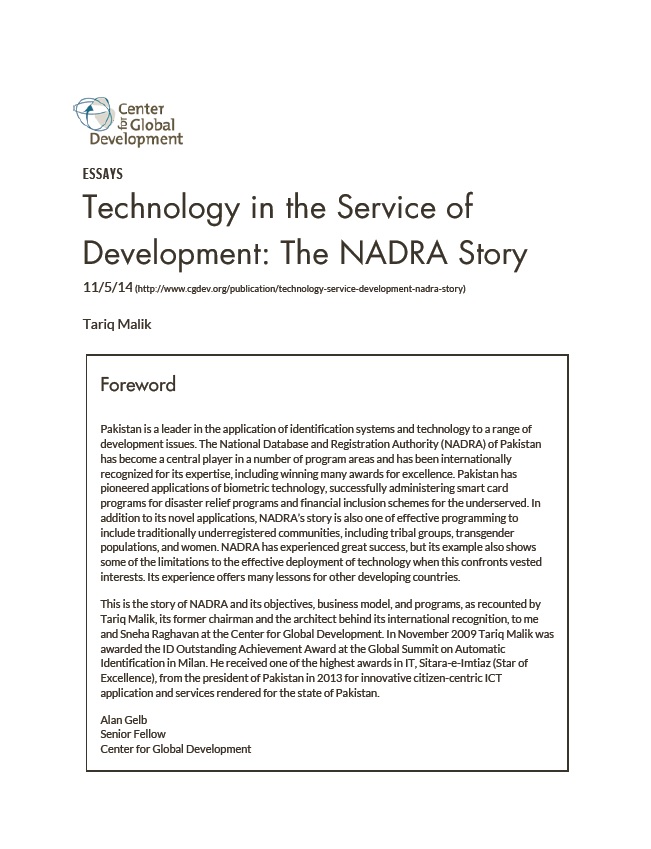 Journals, Articles and Working Papers, 2014
Technology in the Service of Development, The NADRA Story

Pakistan is a leader in the application of identification systems and technology to a range of development issues. The National Database and Registration Authority (NADRA) of Pakistan has become a central player in a number of program areas and has been internationally recognized for its expertise, including winning many awards for excellence. Pakistan has pioneered applications of biometric technology, successfully administering smart card programs for disaster relief programs and financial inclusion schemes for the underserved. In addition to its novel applications, NADRA’s story is also one of effective programming to include traditionally under registered communities, including tribal groups, transgender populations, and women. NADRA has experienced great success, but its example also shows some of the limitations to the effective deployment of technology when this confronts vested interests. Its experience offers many lessons for other developing countries. This is the story of NADRA and its objectives, business model, and programs, as recounted by Tariq Malik, its former chairman and the architect behind its international recognition, to me and Sneha Raghavan at the Center for Global Development. In November 2009 Tariq Malik was awarded the ID Outstanding Achievement Award at the Global Summit on Automatic Identification in Milan. He received one of the highest awards in IT, Sitara-e-Imtiaz (Star of Excellence), from the president of Pakistan in 2013 for innovative citizen-centric ICT application and services rendered for the state of Pakistan. Alan Gelb Senior Fellow Center for Global Development

About this resource
Type of Resource:
Journals, Articles and Working Papers
Year of Publication:
2014
Download: