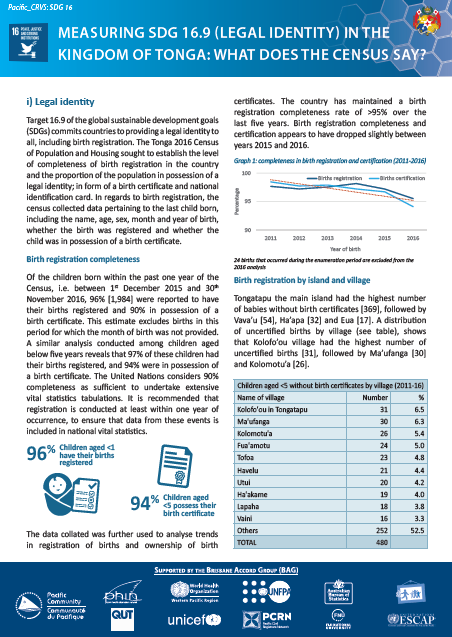 This fact sheet on measuring Target 16.9 of the global sustainable development goals (SDGs) assesses the status of legal identification in the Kingdom of Tonga based on census data.

It is estimated that almost one-in-three babies born world-wide each year do not have their births registered (there are 51 million babies). These children have no form of legal identity;  they are not only invisible to their governments but also lack the means to claim important rights and privileges accrued through the possession of a means of legal identification. This has been referred to as the scandal of invisibility.

Target 16.9 of the SDGs commits countries to providing a legal identity to all, including birth registration. In the Pacific the proportion of unregistered births is thought to be lower than the global average, but little definitive data exists. However, the Tonga 2016 Census of Population and Housing sought to establish the proportion of children (aged below 1 and below 5) whose births were registered,  and those in possession of a legal identity; in form of a birth certificate and national identification card.

The fact sheet covers different aspects of legal identity such as:

About this resource
Type of Resource:
Country Assessments and Strategies
Year of Publication:
2018
Download: